I am currently carrying on a borderline love affair with Texas. It entails going to Austin on a regular basis, wearing vintage cowboy boots, and singing along to country songs on the radio without knowing when I learned the words. I also show up wherever the Cornell Hurd Band has a gig.

I first saw the Cornell Hurd Band in August at the Broken Spoke dance hall and was insanely captivated by the band member who rocked a washboard over his considerable belly. I have since found out that they call this a rubboard and this gentleman, Danny Roy Young, also goes by The (unofficial) Mayor of South Austin and LORD OF THE BOARD.

After enough tequila I was talked into taking on the two step dance floor and got a bumpersticker autographed by James M. White, the founder of the Spoke, for my efforts which were sloppy, to say the least. 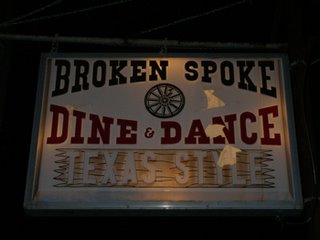 I revisited the Spoke in October and was surprised to find a tour bus wedged into an outside corner of the building. Evidently there was a miscommunication between the brake and accelerator and someone drove full speed into what was NOT a parking space. I peeked around the bus crash with Jimmy and Jade, hmmed and hawed, and then went inside to guzzle more pitchers of Bud Light.

Now, back in Ohio, I can't stop thinking about fresh jalapeños. I'm wearing my silver-toed boots but am seated in a hookah cafe surrounded by old North African men and preppy OSU students blowing strawberry tobacco into fruity clouds around their heads. I wonder what's up at the spiritual home of my boots? Well, I checked the Broken Spoke website and can tell you, straight from their winter newsletter:

"Let me tell y'all 2005 was a full year. I will never forget what happened on that day (Sunday October 2, 2005). I have told this story a jillion times which is more than a million or billion or trillion. I heard a real LOUD crash. There was beer signs and glass crashing and sailing thru the air. Then when the dust settled I saw two head lights and a bumper inside my Texas Dance Hall. I hollered out 'what in the hell is it?'

We've had tour buses for 40 years, but none of them have driven thru our building. Some people go their whole life without having a tour bus crash into their business or residence. Oh well my Moma told me 'Son it's a rough old world out there, so don't let it get you down'. Someone asked me later 'I didn't know you had a drive thru'."
Posted by ronckytonk at 10:00 AM