It was my last year of college and I spent it, as they say, studying abroad. I quickly banded together with three girls at my school in Quito - two of whom also went to my school back in Washington State, the Evergreen State College - and I knew Miguel by name only for several weeks.

He told me later that he dismissed us as the "Evergreen Crew" and unfairly assumed that we were a no-good group of pot-smoking hippies who spent all of our free time making daisy chains and talking about Native American history. Despite all this we became friends on a field trip and soon thereafter, back in the city, Miguel started tagging along and asking us what we were doing after school.

While I was feeling fairly unconcerned about what to do with an impending degree in LIBERAL ARTS - Nothing else on my degree, just Liberal Arts - Miguel was shitting himself about how to use a B.A. in Geography from the University of Washington. In Seattle he worked as a Starbucks barista and thought maybe he could get into the international coffee trade. Miguel took a pound of Starbucks Blend to Mitad del Mundo, where a bright yellow line is painted on the ground showing where you can stand with a foot in each hemisphere, the equator directly below your crotch. He placed himself on the equator, held the coffee close to his heart, and had a photo taken which he promptly sent back to Seattle with the note, "Now that's what I call Starbucks International!"

In case that ploy didn't work, we brainstormed on what else he could do and came up with: Lounge singer at the Cloud Room, a bar on the top floor of the Camlin Hotel with 360 degree views of downtown Seattle. Miguel bought a keyboard and found a piano teacher in Quito but his enthusiasm eventually waned.

When I moved to Seattle two years later, I slept in the closet of Miguel's studio and made ham sandwiches at his side every morning before shuffling off to a soul-crushing temporary position with a long-distance telephone service. Miguel kept busy applying the geography degree to his own series of enigmatic fields involving maps, freights, and long, long hours stacking pencils. 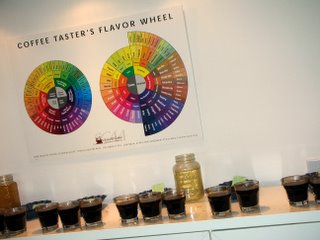 Now employed with Atlas Coffee Importers, Miguel has done the enviable: EXACTLY WHAT HE WANTED TO IN THE FIRST PLACE.

Miguel has traveled to Central America and Rwanda to meet with farmers and communities about the specialty coffee business. He learns, teaches, "cups", and gets to hike alongside 500-lb Silverback gorillas in the Virunga National Park. Seriously? And when I am in town he brews me the most delicious cups of coffee I've ever tasted. 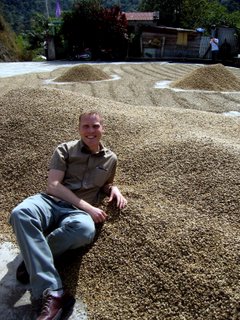 Posted by ronckytonk at 7:10 PM