This morning Jocardo and I went on a roadtrip to Falmouth, Kentucky. He had to deliver an amp for a theater production in Falmouth and felt apprehensive about how he might be received from the 95 percent white citizenry of the small Kentucky town. He didn't want to go alone. You see, Jocardo doesn't blend. It's not for any lack of adaptability on his part - Jocardo is impeccably gracious and polite - but he's simply a black man with a lot of presence. He has also experienced enough in the past to be acutely aware of situations in which he is out of place in the present.

We drove south on Route 27, found our destination, dropped off the amp, and were pulling out of the parking lot when we realized we needed windshield wiper fluid. We stopped at a Marathon gas station to buy wiper fluid and coffee and ogle the TREMENDOUSLY large Texas Hold 'Em lighters for sale. Working the lighters was a two hand operation, they were so big. They were so much bigger than a cigarette that I decided they must be for Civil War reenactments and the cannon firing that that entails. 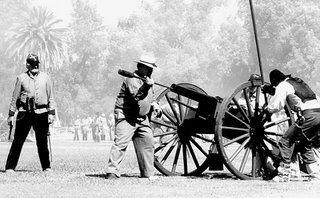 At the register I became engrossed by the cigarette boxes emblazoned with a rippling Confederate flags and the words REDNECK OUTLAW. We'd almost left the Marathon station without incident when I decided to make a purchase. I was looking for my wallet and pulling things out of my bag when I saw that a pair of my black underwear were sitting in plain sight on the counter.

Apparently when I thought I grabbed my black hat from my suitcase this morning, I ACTUALLY grabbed a pair of underwear. Ooooops. I snatched up the unmentionables, sprinted to the car, and told Jocardo I'd given Marathon cashier man a peep show.

To which he replied, "You know right now he's going that whore has a black boyfriend AND extra panties in her purse!"
Posted by ronckytonk at 5:52 PM

It seems that our roadtrips are always of the memorable sort. Who else would drive down to Foul Mouth, Ky (as TMAC calls it) and proceed to drive through some of the buttfuckiest parts of the k-y. I would choose no other person to hurl through the foggy kentucky morning with me and brave both the KKK and the Monster Lighters. Who cares what the clerk thinks? I'll always be your black boyfriend...well, half at least.