Last night the news announced a severe storm warning for Central Ohio. I didn't take much notice since I have grown out of my childhood inclination to worry myself to pieces about potential danger from the outside world. I woke up early this morning to the sound of wind buffeting the house, something bouncing through the backyard, and a wind chime wildly chiming. My first thoughts were predictable for someone who has, in the past, been terrorized by the idea of tornados.

1) Should I crack the windows?

2) Should I run into the basement? 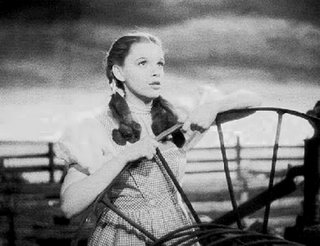 I've never actually faced a tornado but, as a kid, the Wizard of Oz movie was enough to rivet me to the radio and television for updates on tornado warnings and watches in Southern Ohio. Before I saw Oz I didn't understand what a tornado was.

Once when my parents made me get out of the bathtub, wrapped me in towels and took me to the basement, I thought we were waiting for a GIANT TOMATO BEING DRIVEN AROUND THE CITY ON THE BACK OF A PICKUP TRUCK. We were hiding in the basement. From the tomato's poisonous and deadly juices, duh.

My third thought this morning, however, was new. My computer is coming with me.

As a child, I made disaster-planning lists. I deliberated on what prized possessions, like Paddington Bear, would get to come to the basement with me. In the event of house fire, I mapped out a route that included waking my parents and brother before grabbing special belongings. Too bad the one time our smoke alarm actually did go off in the middle of the night, I bolted with no regard for my family or my belongings. I flew downstairs and out the door without looking back. My mom found me shaking head to toe on the front porch, told me it was a false alarm, and persuaded me to come back inside.

I like to blame some of my former fears on my wonderful elementary school teacher, Alice Jansen. Ms. Jansen used to gather us first, second, and third graders for lessons outside the parameters of arithmetic, grammar, and geography. She solemnly informed us that it was disgusting to not wash our hands after using the toilet, showed us how to safely carry scissors, begged us not to eat pills we found on the floor, and reminded us why it was a bad idea to stick our heads out of the school bus windows (decapitation). Finally, Ms. Jansen said it would be a perilous mistake to linger in a house on fire. Ms. Jansen had a dog named Beowulf whom she cherished. She told us that she wouldn't go back into a house on fire, EVEN TO RESCUE BEOWULF, and that it would be to our mortal advantage to follow her example. It made an impression.

This is why my lists were so important to me: once I saved myself, there was no re-entering the house or leaving the basement. I had to take care of business beforehand. I realized in bed this morning that my prized possession is now my computer. I've treasured my iBook since last May and have made jokes about tucking her into bed next to me, smoothing the covers over her shiny white shell. When I bought a Mac, I was so happy that I never had to call the Dell help desk in India again. The iBook stores my photos and keeps a record of my untangling thoughts. With it I write to and talk to people on the other side of the country and the globe.

I had an image this morning of the pose I learned in elementary school tornado drills: me curled on the ground with my face buried in my knees, hands clasped behind my neck to protect my spinal cord. But in my mind this morning I slid the iBook under my belly.
Posted by ronckytonk at 5:08 AM

It's always amazing how we are taught to "duck and cover" during a tornado. I remember at Sands, a building built close to the turn of the century, sitting in the hallways and stairwells near the cafeteria or playroom, hundled against the wall, smelling my own ass and thinking...How in the Hell is this going to work? Now, I am a ibooker too but I'm not as bad as you, RT. I have three dogs to grab and then my ibook. Who am I kidding? It's ibook all the way.