I recently strolled around the grounds of Ohio State University. I sat on a bench by Mirror Lake and thought about how campuses feel to me now rather than twelve years ago when I started school. These days I'm not stressed about finding my people or the least bit concerned about who I'll eat dinner with in the cafeteria. I'm certainly not pretending that watching the Star Wars trilogy every week with the stoners down the hall is stimulating.

Now I get a kick out of observing people and pretending I'm making a documentary on them. The kid with acne, the one smoking a pipe, definitely made the edit. I kept my fingers crossed that I'd spot someone wearing an elbow-patched blazer, preferably someone else who also looked barely pubescent, but it didn't happen.

What did happen, however, was GIRLS IN PAJAMAS.

The trend of attending class in sweatpants with the waistband rolled down and a word plastered across the behind, top picks being PINK and JUICY, is pervasive by all accounts so far, which leads me to conclude that school these days is synonymous with slumber party.

I happen to realize that this is far from accidental: Victoria's Secret targets 18-to 22-year-olds, and, as part of their fall 2004 collection launch, selected 20 college students from a nationwide search to be spokeswomen in university dorms. These campus ambassadors - Team Pink - were chosen because they're a) cute and b) know a lot of people and can get the word out: pajamas are in, thongs are in, flip flops are in!

Victoria's Secret proclaimed in a Associated Press statement that the Pink collection "expresses that lingerie is more than just underwear, but a necessary and fashionable wardrobe extension. Some of the ambassadors are ready to wear the longer, more substantial pajamas right into the classroom."

You can sleep in it and get up for that 7 am class, and go!

I also happen to realize that I have little ground to stand on when I get critical. 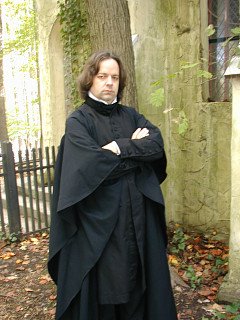 My professional wardrobe over the years has included combat boots, overalls, and tank tops, so who am I kidding? Not a certain lady at the Woman's National Democratic Club a few years back.

I used to go to conferences and events regularly in Washington, DC for my publishing job. Once I went to the WNDC wearing cowboy boots, big belt buckle, purple velvet blazer, and hair festooned with blond and red streaks. I was nibbling on a cheese cube and listening to a political debate between my boss and the lady when the lady stopped, glanced at me and said, "We should stop. We don't want to scare the child." I stared at her as she continued, "Are you even an adult?"

My boss shot back, "She's an adult. She's just a cool-looking one."

We gave each other high fives with our eyes and made fun of her later in the taxi. What I was wearing was appropriate for a New York function but wasn't quite as conservative as DC decreed.

I do think, however, that there's something to the notion that WHAT you wear and WHERE you wear it do two things: 1) reflect what you think, 2) affect how you think about whatever it is you're doing. I'll wager that aesthetics of people and of environments mean something. I'm just not sure what.

Take my grey years. My office in New York was grey: grey walls, grey floors, and grey cubicle dividers. The motherfucking bulletin board was grey. I hung photos I'd taken in Alaska in my cube to remind myself that there are things in the world that are not grey and that those things are called glaciers. When I got my own office, I installed a giant red-orange lamp to cast a lovely non-grey hue about me until maintenance men kept singing "Roxanne" when walking past and I gathered they might be getting the wrong idea. But all along I was fighting a grey, grey feeling.

So, do pajamas-in-public make a girl more interested in cuticle treatments and mud masks than her diploma? I don't think so. And I'm sure the medieval founders of modern academia would find my Converse and Levis an abominable affront. So why do all those juicy pink cabooses make this girl want to put someone in time out? I'm getting old.
Posted by ronckytonk at 6:56 AM

Hey Jess,
Does your recent birthday qualify you for the beginnings of a generation gap? Just wondering...

Hey mom,
Unless I got knocked up at age 13, no.
But I'm getting close and don't think I haven't been wondering the same thing.

damn your up early.
have you seen the parody site "what is vicotria's secret"? so good.

elisabeth used to wear pajamas to high school, old man style pjs, too, cause she couldn't be bothered. i love it. hate the juicy crap tho. another reason to hate boring sorority chicks.