For six days last year I didn't drink coffee because Kelly talked me into trying the master cleanser detox. This photo demonstrates how extraordinarily healthy Kelly is: even at the bar she cannot refrain from warming up in case something healthy might happen. 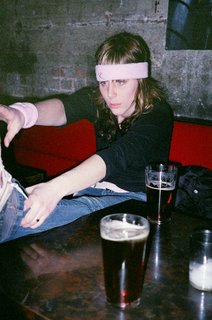 I'd heard about the master cleanser because Ariel was a big fan of subjecting himself to austere dietary restrictions and then announcing that his PIPES WERE CLEAN right before nibbling on a sprig of parsley or a grain of rice. A few others also told me that when they drank water with maple syrup, lemon juice, and cayenne pepper for days on end, they felt a heightened sense of energy and clarity in mind, body, and soul.

Initially I was concerned about fasting since I feel crazy when I haven't eaten. My blood sugar drops quickly and once made me pass out at the top of a staircase and get a black eye from the windowsill I hit on the fall to the landing.

But this memory and my hesitations were assuaged by the all the hoopla I read about Grade B Maple Syrup which is high in B vitamins, minerals, and calories. See, you're not actually starving yourself and thus experience bliss instead of a potentially crippling eating disorder.

I didn't give a dang about food on my first day because I was far too consumed by the devastating headache caused by lack of coffee. I stayed in bed under my covers all day and irrationally wanted to punch Coco's lights out when he walked past my bedroom door with a steaming cup in his hand. I could have cried. By day six, I felt pretty good, still hadn't fainted, and my runny nose was gone but I was starting to miss food. I know I need to eat when I CANNOT STOP THINKING ABOUT THE CANNED TOMATOES ON THE KITCHEN SHELF. Just as much, though, I missed coffee and the ritual of making coffee, waking up to coffee, smelling coffee, and buying coffee.

I remembered the days I spent in a stone cottage on the Scottish shore with English and Sri Lankan friends. There was no coffee in the house and every morning one of the Sri Lankans woke us up by entering the bedroom with a tray of hot teacups. He enunciated clearly in his crisp accent, "TEA?...TEA?.." while distributing the cups to us in bed. Sadly, instead of feeling gratitude, I felt exasperation, sadness, and the desire to whup ass.

I know that coffee dependence is one step away from a Ritalin prescription and that it's a fine line between that and a cocaine habit but I give in nonetheless.

Posted by ronckytonk at 7:26 AM

"Fuck Healthy" is what the t-shirt said on the slightly plump girl in front of me. I nodded my head in agreement. "You betta work it gurl, like you ain't rentin' it!" I said silently to myself as I smiled at her on the bus. She looked over at me and said "What the Fuck are you smiling at?" I looked down at the carrot I was eating in my hand and looked back at her. As the bus slowed down to my stop, I stood up, with dignity and grace of course, and poked her in the eye with my carrot. I said "Yeah, Fuck Healthy Bitch" and exited the bus. I know what it's like to not have coffee in the AM. It ain't pretty.