On Monday afternoon I slunk into the Gypsy Cafe for my routine: buy large mug of tea, sip for five hours, disappear into laptop galaxy and wonder how businesses stay afloat with customers like me. I was settling into my seat and plugging in the computer when I saw the shoes.

Transfixed, I asked the gentleman if I could take photos. He looked at me cockeyed and asked why. I said I just like documentation and threw in that the shoes might turn up on the web.

He extended his hand across the divide between our tables and introduced himself with the same name as a outlandishly famous pop star.

"Lemme see your license," I said.

The man was, in fact, named Michael Jackson. Due to this identity collision, he regularly fields calls from little girls, big boys, and people who wish to threaten his life. We got to talking and he showed me his pink hat and pink belt and described the green snakeskin shoes he wore for St. Patrick's Day.

We launched into a conversation on literature and publishing and had a disagreement on why so many bad books are published. We lambasted political correctness and noted the inability of many people with opposing beliefs to speak to each other without becoming unreasonably emotional. Some of my social views clashed sharply with those of his and while it's usually easier for me to talk ABOUT unreasonable emotion than control my own unreasonable emotion, I was totally under control on Monday and had no surges of facial tics.

When he professed to be a born-again Christian, geek, and Democrat, I realized what made him delightful: 1) he was surprising 2) he listened. He could TALK, but he also shut up, grabbed his pipe, and leaned in intently when I had something to say. While he was explaining his interest in science fiction, chick flicks, and kids movies, another man walked in the cafe and he greeted him.

"Hi Blackie. How are you, movie star?"

Michael Jackson informed me, "He's in a movie. He's a gangster."

A few moments later Blackie gave us a piece of cake with two forks. Blackie plays a gangster in One in a Billion. The man said that he and Blackie argue about lots and lots of things but agree on at least one subject: Ken Blackwell is an a-hole.

Ken Blackwell - Ohio's Secretary of State, co-Chair of the state's Bush-Cheney campaign, and chief election officer for Ohio's embarrassing 2004 presidential election - has come a long way since his dashiki and afro days.

Ken's the guy who said barnyard animals have better logic about coupling than same-sex humans and tried to reject Ohio voters who registered using paper that wasn't thick 80-pound stock. BECAUSE THAT'S WHAT DEMOCRACY IS ALL ABOUT. Michael Jackson said that when Ken talks, he levitates, he gets so puffed up by crowds of salivating supporters. A past political opponent once said that Ken likes television lights so much that when the refrigerator light goes on, he gives a three-minute speech. 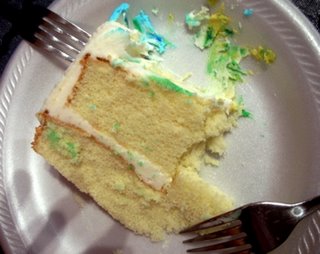 Several hours later, we shared a piece of cake.

"Are you going to eat any of this cake?" I asked him. "Because I'm going to town on the icing."

A-MuthaFukin-Men!!!!!Ken Blackwell is a pass-hole closet case. I have way more commen sense to couple with a barnyard animal...now, I have coupled in a barnyard with a hot farm hand but I don't think those two ideas are mutally exclusive. The point, Ken Blackwell is a jack wad.