This weekend I learned that TJ chews on staples. "Here, watch this," he said and then popped a staple or two in his mouth and chewed away. I was taken aback for a moment.

"Dude, this might mean you have a serious vitamin deficiency," I said.

An Ecuadorian once told me that he loved eating dirt as a kid. Apparently he couldn't get enough and spent a ton of time over the years shoveling handfuls into his mouth. He also repeatedly got parasites.
I thought the image of my Ecuadorian friend salivating over dirt was funny until I stumbled upon the information that dirt-eaters may suffer from severe iron, zinc, and B vitamin deficiencies and I felt like a jerk.

This condition - craving non-food items - is called Pica and is named after the Latin word for magpie, a bird known for its random appetite. The causes of Pica are unknown but a nutritional theory suggests that appetite-craving brain enzymes, altered by vitamin and mineral deficiency, trigger the cravings. The physiological theory is that eating clay and dirt relieves nausea, controls diarrhea, increases salivation, and removes toxins. When Pica strikes, people have been known to turn to dirt, paint, metals, clay, plaster, chalk, rocks, cigarette ashes, sand, and gravel to get their fix.

I don't know what TJ's story is (Does he take multivitamins? Eat lots of leafy greens?) but during his exhibition, right after I asked if he ever gets hurt and he shook his head no, one of his flourishes with the staple went bad and it stuck in his gums.

I looked on as he bared his teeth, pulled it out, and checked for blood. TJ was vague when I pressed for details as to how long he's chewed staples and how often he indulges. I don't know if he gets excited every time he sees a stapler or if he plays it cool. I do know he can tie a staple in a knot with his teeth. Now that's talent. 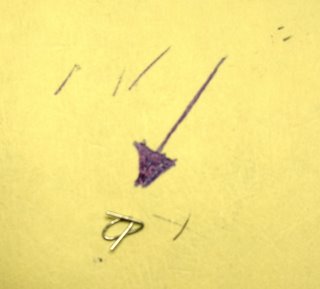 Posted by ronckytonk at 2:09 PM

pretty gross, although I have been loving to have paper clips in my mouth lately. Kind of the commitment-phobes staples. I also used to teach an african kid who was always snacking on the chalk. He looked so striking with all that white powder all over his beautifully dark-skinned face.

anywaysssss.
imma try to send you a skyline pix one of these days.

I chew ice-cubes, apparently it is to do with an iron deficiency (although I'm not anemic)

work that one out!

like Arnie, I'll be back. . . gotta go raid the freezer now though