I couldn't say my old address, number 64, until Zan tipped me off. It sounds like "fear and sexy". Vier und sechzig. This, conceptually, was great to know. I moved then into a new apartment on another street, number 66, and now live at sechs und sechzig. SEX and SEXY.

"Wow," I thought, "My new address is hot. I have an extremely hot address."

Which also makes me think I should consider getting some new hobbies besides having ridiculous conversations with myself all day long. 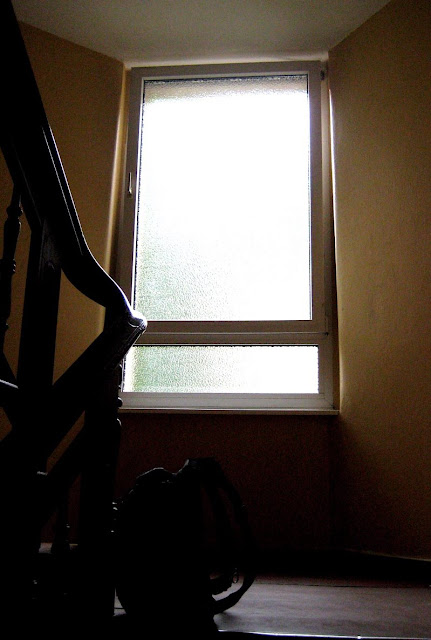 I was walking down the stairwell yesterday when I hit one of the landings and noticed that someone had scrawled the word fuck on the windowsill.

Just that one word. Not fuck you or fuck off. Just the plain old f-word.

One more flight down were three small black letters on the wall: sex.

Someone around here is preoccupied. Or maybe not someone. Everyone! Maybe humankind is a bit preoccupied. It's caught my attention that the word fuck often doesn't get translated out of English. It has its equivalent in other languages but in the parts of the world that I've been to, I've heard people say it just like me. 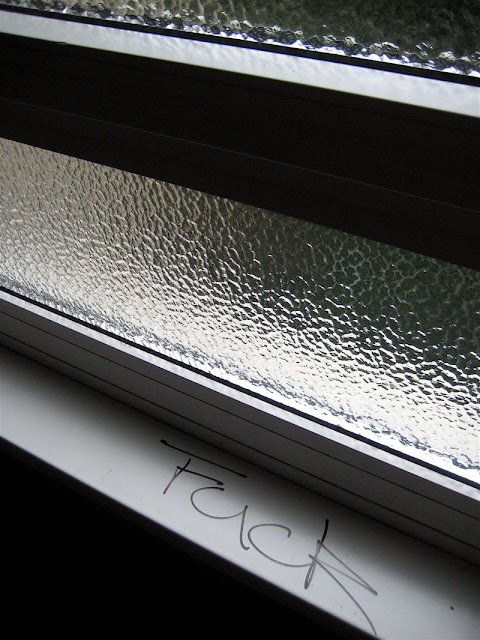 And we know I don't shy away from the f-word, though my mom wishes I would quit sticking mother- on the front of it so often.

I've never, however, heard the f-word abused as much as I did in Ecuador. The Quito streets were an exercise in withstanding daily verbal assaults and I dealt with it according to my mood.

I usually ignored the dregs who hissed, "Hey baby, you wanna fuck?" as I passed them on the sidewalk. Sometimes I met their stares with the coldest, hardest, daggered eyes I possessed.

I found that rage and indignation provoked them. Sometimes I couldn't resist giving someone the finger but that usually made them laugh, "Yeah!" No, dude, NO.

And then there was the day that Taryn and I bought water guns and shot men who talked to us like that. This was incredibly satisfying for a few hours.

In Berlin I've had very few incidents of street molestation. Whatever men are thinking, they've kept it to themselves and I appreciate that. I appreciate not feeling myself brace and stiffen when passing men on the sidewalk. Sheer presence hasn't felt like an attack. Eye contact hasn't felt like murder.

There was one guy in Charlottenburg who followed me up the street, asking me questions about myself. I was about to go from politely dismissive to "Get the fuck away from me, shitspeck" when he exclaimed, "But your hair is beautiful!"

And I couldn't help it; I started laughing. Oh, I'm sorry, I didn't realize that my beautiful hair negates everything I've said to you up until now. When I recovered and again said no, he tried one more time:

This guy is a fucking idiot. What I thought was, "You have no idea how irrelevant that is to me." Clearly I can't say that in German, given that I can't say anything involving verbs, adjectives, or conjunctions. I deal strictly in nouns.

So I got my sharp-armed serial killer eyes out of wherever they've been hiding and gave him a nice long look at what it would be like if I went Chung Moo on his sensitive regions.
Posted by ronckytonk at 12:24 PM

You always worry me. I understand that you are a big girl and can take care of yourself. You've traveled the globe (with Spice and without) and have trained your body to become the fierce weapon in the art of Playdoh, but I still worry. It amazes me how asshole-esqe (or straight up assholes) men can be. Be safe, darlin', I need you to come back so you can tell me what to do with my life.

I for one would be quite curious to see what Chung Moo you still have in your physical memory.

I'm also very glad you haven't had to use it yet.

jane, even though I don't bow to the flags anymore or call anyone assistant regional head instructor bullshit, I bet I have a few moves stored up somewhere. remember how much they used to talk about muscle memory?