1. Drink too much beer and schnapps AKA "snaps"
2. Ride our bikes home drunk
3. Picnic in the park with brie and plums

- was roam around the Ny Carlsberg Glyptotek museum.

The museum was founded by brewer Carl Jacobsen and he named it after his beer and then tacked on Glyptotek. Glyptotek means collection of sculptures in Danish and, lordy, does the place live up to its name. Roman and Greek statues were literally STUFFED into some of the rooms, there were so many. They began to look like storage.

"Goddamn, the Romans kept busy," Joanna and I said while wandering past ANOTHER poor statue missing its nose and marble penis. 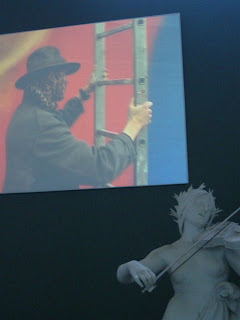 I was happy to see an old favorite, Auguste Rodin, but even happier to discover Zevs, the anonymous French street artist.

Because one is not expecting to see video of a guy with leopard-print pantyhose over his face spray painting a bullet hole on the head of a billboard model in the middle of a statue exhibit. But, hell yeah!

Zevs named himself after a train that almost ran him down when he was tagging in Paris. He inspired the term VISUAL KIDNAPPING in Germany when he cut a model's figure out of a giant poster in Berlin's Alexanderplatz.

He spray paints around shadows in city streets and makes corporate logos ooze slime and I imagine generally has a lot of fun creeping around under the cover of darkness. 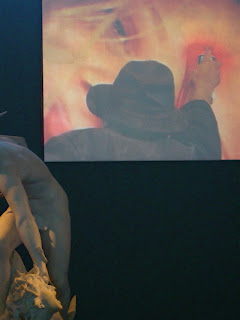 This part of the Zevs exhibit is called Serial Ad Killer and is all public interventions and video documentation. The video screens are mounted on walls behind statues like Perseus Slaying Medusa, The Newly-Created Eve, and Narcissus Regarding His Reflection in the Spring.

Another room looped through a video called The Homeless & The Shadows. It was shot at 3 am in New York City and shows Zevs painting the contours of a homeless man sleeping on the sidewalk and the shadows around him. On the wall next to the video hangs the 1859 portrait by Edouard Manet of a vagrant, The Absinthe Drinker.

But by far, the trippiest most epileptic seizure-inducing space in the Electroshock exhibit is the pitch black room hung with mirrored portraits of famous figures, illuminated and obscured by flashing photographic strobes.

Joanna and I stood in front of each and managed to identify some of the faces - Superman, Marilyn Monroe, James Morrison, Einstein - but were stumped by one. Maybe if we'd stood there for ten more minutes we could have figured out it was Che Guevara but I wasn't that interested in having a full-blown acid flashback so we opted to cheat and look in the museum store book.

For more videos of Zevs attacking the museum, go here.
Posted by ronckytonk at 10:23 AM