Too short too wide Cure shirt 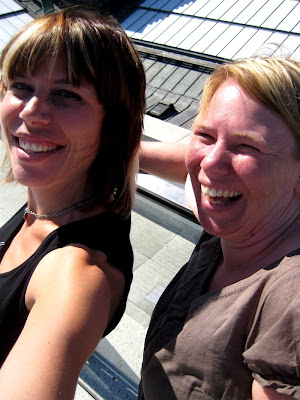 I just spent the weekend with Joanna Friberg. I haven't seen Joanna since I was 25. Before that, we hadn't seen each since we were teenagers.

And it was funny, hanging out with a friend with whom most of my memories are rooted in the 14-15 aged years. I realized how much bullshit my brain must regularly retain without my awareness.

Joanna and I were walking down the street and all of a sudden I remembered the Swedish word for beard.

She started laughing, "Yes, it is."

I remembered that skägg was the first Swedish word I learned when Joanna arrived in Cincinnati in 1989 and that I wrote it in a red and gold diary. I didn't remember WHY I needed to know the word for beard but Joanna did. She reminded me that both of our fathers shaved their beards that year. Which doesn't sound like a big deal but trust me, it was.

I'd never seen Bob Roncker without a bushy beard in my whole life so the morning I went in my parents' room and this stranger pulled the covers from his head and smiled at me like a circus clown was shocking. Dad, all those wild heaves and gasps I made while backing away from you? That's what trauma sounds like.

He shaved it on my birthday in March, which was a great present. For your 14th birthday, I'm gonna make you think your mom got you a new dad! The freaky guy with all the skin on his face! The fact that I was still talking about it when Joanna showed up that summer is an indication of how sensitive I was.

I remembered how I couldn't go into the Friberg's house in Göteborg without picking at least three handfuls of the cloudberries growing in the side yard and stuffing them in my mouth.

I remembered that Joanna was a New Kids On The Block fan and I asked her if she had a NKOTB shirt. I thought she did but was probably making that up because I really just wanted to imagine her in one and make fun of her. She said that, no, she didn't, but she DID have a Cure shirt that was way too short and way too wide and looked ridiculous and that was a good enough image for me.

I ALSO remembered that sometimes we meet people and they have an unintended and huge effect on us. For the two years before Joanna and the Swedish interchange group showed up in Cincinnati, I'd been spending a lot of time with the "cool" girls. I told Emily, another one of the girls who spent all summer at Clinton Hills Swim Club and all school year clawing her way up the social ladder, that I was doing an interchange.

What? Because Sweden has a reputation for being so RUINOUS.

But before I even got the chance to be personally destroyed by the 20 hours of sunlight a day, beautiful natural environment, reindeer pizza, and blond people stripping everywhere, the Swedes came to Ohio. I took Joanna to the swim club and saw my "friends" through outsider eyes. And I made a decision, an important, simple decision. I wanted friends to be nice and if they weren't nice, I wasn't friends with them.

That summer after eighth grade, I didn't see much of those friends because I was with the Swedes and I didn't go back. If it hadn't been for Joanna, I might have later been a bulimic backstabbing soccer player. Instead I was a chubby 2-miler. A well-adjusted chubby 2-miler. The track team might not have been as cool but goddamn, it was funny. And nice. Thanks Joanna.
Posted by ronckytonk at 12:06 PM

Wow, I'm proud to have turned you chubby! And thanks for putting the image of me with the too short too wide cure shirt out there, really the internet profile I was hoping for. /JMFF

And thanks for a lovely weekend!