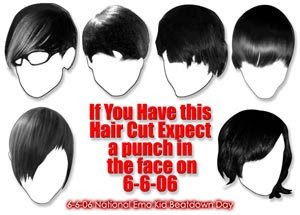 I saw this on a blog and I laughed. I stole the image for National Emo Kid Beatdown Day and was going to say something funny about it yesterday.

Something about how I have no business talking since half the chicks in Berlin are sporting a variation of my hair and how some of my best friends have angular haircuts. How there's something vaguely hilarious about "expecting a punch in the face" for being emo, which almost no one I know can even define.

Except that an ACTUAL punch is not vague at all. It's very direct. And there are kids actually getting punched in the face for being emo which reads, to some, as homo.

I did some research and thought at first that the article I was reading, "Anti-Emo Riots Break Out Across Mexico" from March 27 was satire. But no, it was real news, reporting on how kids with shaggy, chunky hair and eye makeup are being attacked by other groups the reporter labeled as punks, metal heads, and gangsters.

Teenagers are notoriously insecure and some try to elevate themselves by putting others down but this isn't that. Or not JUST that. I read about the series of attacks, rampages, and police protection and then I went to a few blogs where I saw the words Anti-Emo Death Squad and Movimiento Anti Emo Sexual and I couldn't read anymore because I felt sick.

I thought about the stupid Tom Clancy book I tried to get into which was set in 1996 or something and the characters had just found out about this thing called the Internet and had these conversations, "Bill! I did not know you 'surf the web!'"

"I don't, but Jimmy's kid Billy does and hoo-boy is it interesting. Apparently neo-Nazis are spreading their vile words of hate on this newfangled thing called the Internet."

"What! Get Agent Blah-Blah on that right away!"

And I thought about how white shoelaces on combat boots means something in Germany, and I'm sure Germans get sick of this, but SORRY, IT HAPPENED AND IT WAS A BIG DEAL, I thought about Nazis and people who still believe in the same hate today and take it out on queers and anyone else who is different than them and I was sorry that I was going to make a joke about it.
Posted by ronckytonk at 3:31 PM

Labels: are you f'in serious?, for yer consideration, Germany, Mexico

well put. the DW laughs at stuff like this, too, sometimes, but ain't it a shame that not everyone takes it as a joke...