A f'ing American who writes a blog

I'm on the Berlin Hash message board now and it's been funny this week to get emails from people with hash names, "Hey Racing Lobster, thanks so much..." or "No problem, G-spot, see you then..." I was too new to hashing to get a hash name yet; Too bad they weren't there when I accidentally flashed my vagina at the janitor, that probably would really have hurried that process along.

Ten minutes before I needed to leave the house to make it the hash on time, I realized that I don't want to sever my relationship with this group. Yeah, I felt like shit but isn't that part of what hashing is all about?

I feared that going straight from a night with the MDMA-riddled brains of techno kids to an afternoon with goofballs in running tights would make my brain dissociate. Then I decided that this kind of culture clash doesn't give me an acute psychological disorder, it makes me well-rounded. So I checked the directions for this week's meeting spot and ran to the fridge to find the Nikolassee train stop on the map. I didn't see it and ran back to the computer while cussing the S-Bahn out loud, "You fucking S-train, where are you?"

I ran to the fridge again while thinking, "I'm pushing it to the limit" which naturally made me start belting out Push It To The Limit by Corbin Bleu, my favorite cast member from High School Music. I'M TIRED. 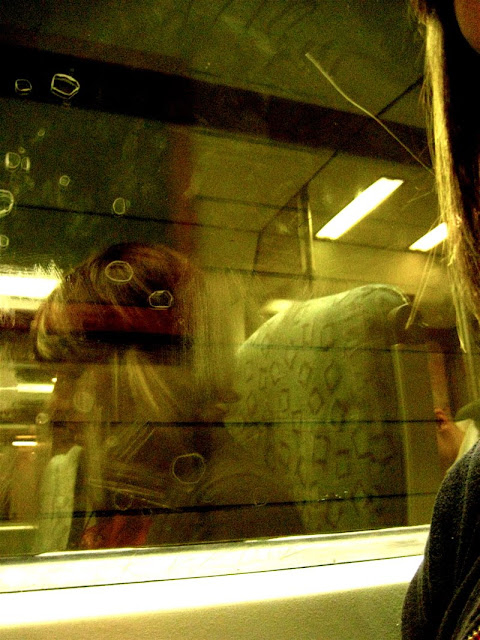 Once I transferred to the S1 and just needed to ride it out to the end of the line, I turned my iPod on and rested my forehead on the window. I left a mark not unlike the smudges that grossed me out so much on my 1980s school bus windows. Except my grease is all natural, no Jheri curl here.

The run was an hour long, through an area that I'd classify as the Beverly Hills of Berlin, through trails and fields, and right at the end, along the train platform. There is something fun about running down the train steps and next to the subway cars but not actually be in a rush and instead just be all recreational about it.

By the time we make it up the train station's last flight of stairs, I'm limping. My hip hurts. Let's just say that one of my killer dance moves the night before might have been a little too killer. 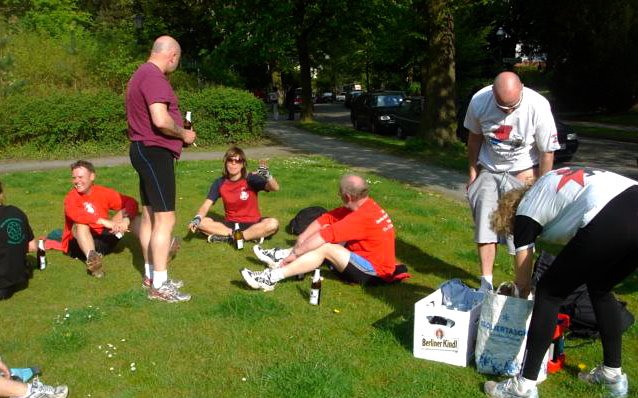 Not that it mattered, since I still got called into the circle three times:

1. For pointing with my finger, AGAIN. It's a hard habit to let go of. I only did it once and realized right away. I whipped my hand around to my back and kept it there like I was holding a cramp, trying to pretend like my finger just HAPPENED to stick out on its way to my back. Yeah, didn't fool anyone.

2. For premature ejaculation: I accidentally knocked my beer over and when I picked it up, it overflowed with foam.

3. For being a fucking American who writes a blog.

My new approach is DON'T EVEN TRY. I'm officially caving. If others are called into the circle for putting the hood up on their convertible and giving out free CDs of African music - inexcusable! - I see that this is one battle you can't fight.

Mouth Organ was called in for having his birthday yesterday. We sang "Happy Birthday, Fuck You."

Fister was called in for being the hare and for not working any beer stops into the trail. Yeah, Fister, what the hell? All you give us are beautiful woods and lake with all those sailboats? That's messed up.

At the end, I was talking to Oral Satisfaction (apparently she talks a lot) about Ohio because it's so awesome and hard not to talk about 24 hours a day. "I'm going to piss in those bushes," I say, "Don't tell anyone." Right.

I return and Stiffi says something to me in German.

"Why not?" He and Fister ask. "It's easy. Little kids here speak German."

Stiffi starts to say the German word for speed limit - Geschwindigkeitsbegrenzung - and a half hour later, when he's done, I know my point is made. 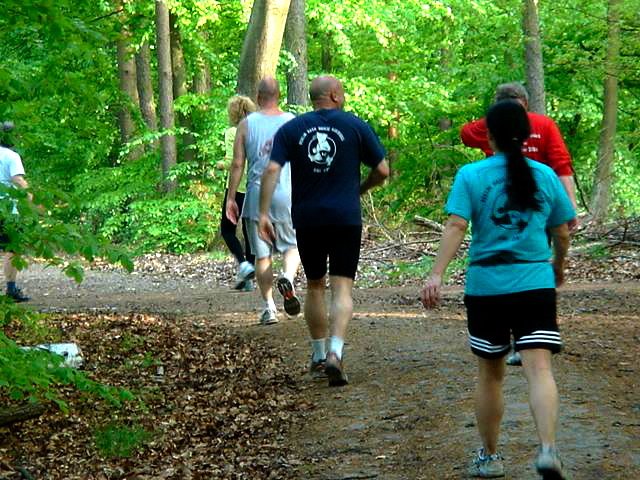 Posted by ronckytonk at 1:04 AM