Getting to the Strandbad Wannsee

Berlin, you are KILLING ME.

During Sunday's hash we stopped to scout out the trail at a small beach on a lake. I noticed that it was terribly pretty and that it reminded me of Seattle's Golden Gardens. I was distracted, though, because I was delirious from running on almost no sleep and because two boys laughed every time I wandered past their towel. I WAS drifting around in circles but that is how delirium manifests. By no means was it hilarious, boys.

This morning I woke to my alarm and jumped off the mattress that the Long Walk Home guys kindly laid out for me in their living room. I had an appointment to see the apartment that I'm renting my last week here. Right away I noticed that don't feel good. For no good reason my head was pounding and my thoughts were molasses-slow. I looked in the mirror and a puffy white balloon stared back. What the hell? This is no state in which to wander around the city or sit in a cafe and be thoughtful. Museums were out: my eyes were so swollen I would barely see the art through my fleshy slabs of eyelid. This is the kind of day I'd get hit by a tram because I was standing on the tracks for ten minutes looking at my fingernails.

I'LL GO BACK TO THAT LAKE. Yes. Just as soon as I figure out where it is and after I make an awesome impression on my future roommates.

I was early for my appointment so I went to a Turkish cafe around the corner and ordered a latte. I sat at the bar and had a nonsense-based conversation with the woman working. All we were able to establish in ten minutes of not speaking the same language was that I'm from America and she's from Turkey. I was listening to the Arabic music and concentrating on not falling off the stool when I noticed her pouring Wild Turkey for two men at the other end of the bar. They must have seen me noticing because they pitched a campaign for me to join them. In drinking Wild Turkey. In the morning.

Goddamnit. I can't meet my new roommates smelling like bourbon at 11 am. I rallied and impressed even myself by my smooth chattiness at the apartment, holding it together just long enough to get back to the sidewalk where I can start crawling to the store to buy a towel for the beach.

Outside the department store in Hermannplatz, I see a punky street kid sitting on the sidewalk. Not a strange sight, all the usual punky street kid signs intact, pink hair and combat boots etc, except he and a little old lady are totally hitting it off, talking and laughing and smiling. She says bye and starts to move on and he sits there grinning to himself. Oh my god, I'm starting to feel better. I want to run over and give them both noogies. I love people much more than I hate them. Sometimes.

I have a towel, I have pecans, I have faith in humanity, I am SO READY.

I'm smiling as the train rumbles out of the city center but the hard part is still ahead because when I get off, I don't know where to go. The hash group got me to the beach after cutting through woods and trails for a half hour. Oh, lord. Am I going to have to hold up my towel and mime the backstroke for someone to point me in the right direction?

Unfortunately, no, because that would have been funny.

The Wannsee lakes are big and obvious and apparently well known. Maybe you've heard the 1951 hit Pack die Badehose ein (Pack Your Swimsuit), a "cheery tune about a group of children going swimming on a hot summer's day at the Wannsee" by Cornelia Froboess. No? Well, she won sixth place in the 1962 Eurovision Song Contest so I don't know why not. 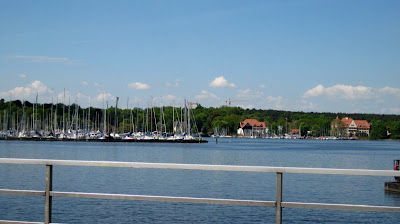 I sit in the grass by the docks and eat my lunch and feel merry about all the sailboats nearby. I like boats a lot even though I have no idea what to do when I'm on them.

I see a bathroom and go to change into my swimsuit since I assume I can find the beach I was at before, the one with no facilities. Since I'm not Swedish I don't like to take my clothes off in front of perfect strangers.

I'm in the stall mid-change, the stall which I think I've locked, when the door swings open. I make a strangled AH-AH-AH noise and reach for the handle and make eye contact with a middle-aged man in blue pants. A facilities guy. Who has the WHOLE PICTURE on what I look like when I'm wearing nothing but a shirt and high tops. Zip.

It's not pretty. Tell me one person who looks good in just a shirt and high tops. Not that I wanted to look GOOD for the facilities guy, I'm just saying. There are naked looks that are more flattering. I'm so flustered by my flash that I forget to flush the toilet so after I've exited and am washing my hands as quickly as possible, he goes back in the stall and does it for me. Double my humiliation. I run out. 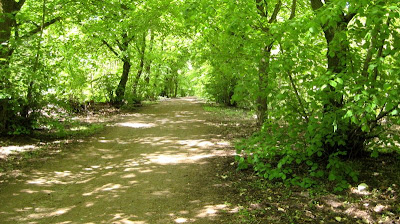 I don't see the little beach from Sunday anywhere so I hike further. Every time I try to cut down to the water, I run into a retaining wall or a rowing club or something that keeps me from making it to the shore. After awhile, the trail opens and I see a group of girls in suits going into the entrance of a brick building. This is promising so I get in line behind them and hand the woman money just to see what she'll give me in return. What she gives me is a day pass to the SWIM CLUB! 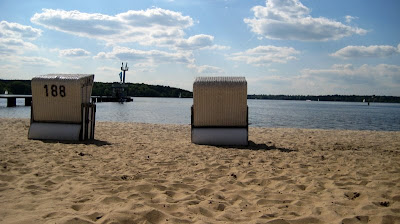 This is not what I was going for but it'll do. This is fancy, this has little cabana chairs that remind me of Beverly Hills 90210 and kiosks selling schnitzel. I was looking for the stretch of sand with a shed covered in graffiti and cigarette butts everywhere.

The best thing about this, though, is that it's in the city. It's at the end of the train line, but it's ON the line. It cost me less than three Euro to get here, to the Strandbad Wannsee, but if I didn't have three Euro I could still spend all day along the Spree and Havel rivers and by the canals in the central part of the city. There is water everywhere. I had no idea. Apparently, from Hamburg, in the north of the country, you can sail through Germany, passing Berlin on your way to the Mediterranean and Black Seas.
Posted by ronckytonk at 1:52 PM