next year I'm going as a sexy pumpkin

I've long been a Halloween dropout and the last time I dressed in costume was in 2001 when a friend in Seattle talked me into going to a party at the Experience Music Project with her. She said there'd be a light show or something marginally enticing.

I tried to be a sport and went as Cyndi Lauper meaning I put on fishnet stockings, some fake pearls, and stood around awkwardly all night probably because I was actually dressed as Madonna. Oh, and there was time when I was bartending that I was a cat.

Still, not very inspired. A CAT? I wore black jeans, a black tank top (what I wear every third day or so anyway) and had the bouncer draw whiskers on my face. Not an award-winning costume.

It wasn't until I started hanging around someone who loves Halloween like it's his job that I thought about truly sucking it up and trying to get into it. Last year I got a free pass because after working on the Rockettes rehearsals for five days with a grand total of 15 hours of sleep, I got sick and spent Halloween night on the couch cursing those long-legged beauties.

This year I was totally healthy and decided to be Coraline Jones from the Neil Gaiman book and Tim Burton movie. Others who played along: 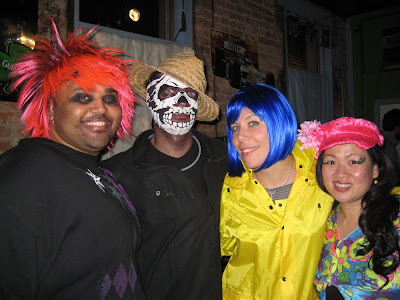 I can't remember who/what Angela is dressed up as here but I do remember our conversation:

Angela: It's nice to meet you!
Me: Actually, we met in 1996 when I went to a party at your parents' house and I sat in their hot tub.
Angela: You were at the hot tub party?
Me: Yep. 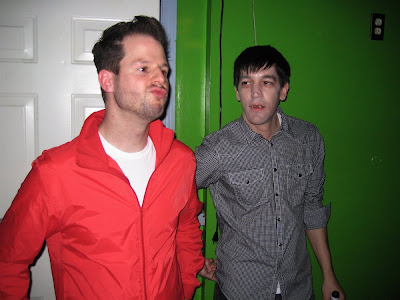 DJ Empirical in a black spandex body suit who I'm taking to be a shadow and Sarah, whose costumed nose is defiantly askew. 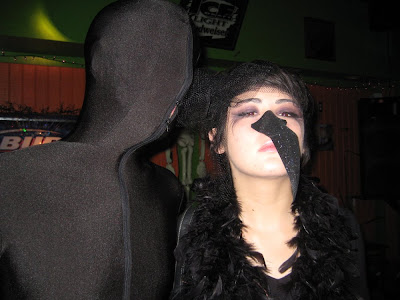 Posted by ronckytonk at 6:05 PM

what's weird is that I actually used to know a sexy entomologist.