The second road trip I took in September was also to Indiana because I JUST CAN'T GET ENOUGH. I'd made a date to eat bacon with Ali Schumacher on September 5 when the tour rolled through Indianapolis. She was to pick me up at the hotel at nine am and take me to a place called Hoaglin To Go Cafe & Marketplace, a place that in the interest of time and syllables I'll just call Hoaglin, to eat bacon.

Ali gets happy when talking about Hoaglin bacon, eyes rolling around in her head happy. She practically composed a bacon sonnet for me. And since she and I used to record cassette tapes of ourselves singing together (badly) in high school, I could absolutely see her doing a bacon lounge song. She would wear a feathered boa and dramatically gesture with a crisp piece of bacon around her face and in front of the mic.

I called her that morning at eight am on September 5, filled with remorse, and croaked her name into the phone, "Ali?"

"No," I said, "but I only slept three hours on the bus ride from Madison and I might die if I don't go back to sleep." I meant it, too. It was going to be a long day, not the kind of day one sleepwalks through and then crawls into the bunk when the show goes down. I had a lot of work and I had guests, my future parents-in-law, and I had to be on, to whatever degree of "on" I could possibly attain.

"I promise to come back and eat bacon with you soon," I said.

Which I did, less than a month later.

I took the Megabus back to Indianapolis and hung out downtown, reading in Borders, until Ali got off work. She had warned me that she had a yoga class to go to and I happily imagined myself sitting in the back, sniggering and trying to catch her eye in the mirror. Six or seven years ago I went to her yoga class in Tucson and was reminded that a) I want to like yoga, but BORING and b) Ali and I should not be allowed to go to any class together, ever.

I learned this first in ninth grade English and later in gym, chemistry, and physics. We get in trouble because we get the giggles, the church giggles, the kind you put your hand over your mouth to block and they escape through your ears. Then you get in trouble via a disapproving look from your mom or your teacher asks you if you have something you'd like to share with the class. Which you do not because the whole reason you were giggling in the first place is so dumb and not funny to anyone else, you can't even explain.

It was a prenatal yoga class.

"How many weeks pregnant should we say you are?"

We went back and forth and decided that I am eight weeks pregnant.

We got to the class and I changed into my pajamas which happen to be yoga pants. Ali had warned me that the instructor might read from a book of verse at some point and might use the words YOUR PRECIOUS BABY and please for the love of all that is holy I should not look at Ali if and when that happened.

I made it through most of the class without pause - I now know that I prefer prenatal yoga because it is so easy except for the two times that I almost passed out because I stood up too quickly - until the instructor asked me in front of everyone "how far along" I am.

"Then you won't need a pillow for this next one," she said.

During the next move, the one with our legs up against the wall, some with pillows and some without, she read us passages about trusting that just as our bodies knew how to make a baby (oh do they!) so will they know how to have a baby and yes, our precious, precious baby etc. What is it with the word precious? I agree that babies are precious so why does that word make me want to punch myself in the eye?

After class she congratulated me on my fictitious pregnancy and I said thank you.

"I haven't told many people because it's so early," I said. "Thank you," and put my hand over my stomach.

"I just found out in the car!" Ali piped up and smiled sheepishly.

We studiously avoided eye contact, left the building, and with the fake pregnancy and prenatal yoga out of the way, resumed preparation for phase two and the whole supposed point of my second Indiana road trip: bacon.

The next day we went to Hoaglin for lunch after stopping at Goose The Market. 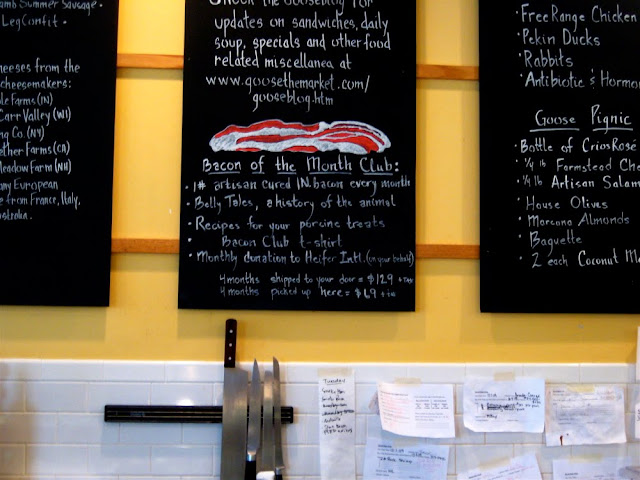 Goose The Market has, in addition to recipes on their website like Coconut Bacon Bars with Poplar Whipped Marscapone, not that I know what those last three words mean, a Bacon-of-the-month club. Would you like to receive one pound of artisanal Indiana bacon every month? Because you can. Would you like a Bacon Club t-shirt? It's yours.

Part of me wants to join but I'm battling the other part that can't believe what an unbelievable pain in the ass it is to make bacon, even with my Bacon Wave. It's a mess. Regardless, bacon is hot, bacon is in, bacon is a fucking phenomenon right now and whether I join the club or make it at home, bacon is the IT food. I blame Atkins.

At Hoaglin, I was on the verge of getting a bacon salad with a side of bacon out of sheer perversity but at the last minute, I caved and got my bacon side with egg salad and curried chicken instead. And it was good. REALLY GOOD. I approve, my vegetarian waitress approves, and I get why Ali planned out the whole field trip.

I'm still trying to figure out why, when I recently flew Delta, bacon was one of the Sky Magazine cover stories. Why exactly bacon is SO popular, as not only food but a topic of discussion and hard, cutting-edge 35,000 feet journalism? Until I crack the code and learn which pork lobbyist nailed whom, I'm eating. 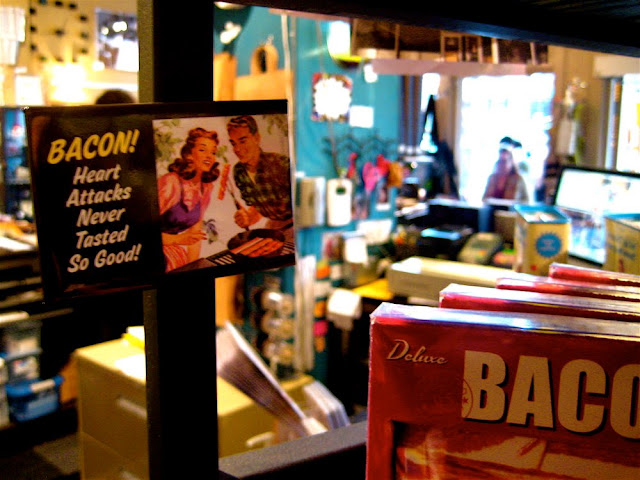 What an excellent recap of the excursion; I chortled heartily throughout. Yesterday the paper had a giant photo and recipe for a sweet potato dish with bacon crust. Not crust-with-bacon, but just strips of bacon overhanging the dish. I think I'll stick with Hoaglin's on the side.

did the waitress really remember me??

Yes! She even remembered that you came from the 'nati.