I may have found my running group.

The last time I ran was in a hotel gym in Los Angeles. After that I sent my running shoes back to my parents house in Cincinnati and considered those laces officially tied. Why? Because running is boring.

I ran track in high school because I liked the girls on the team (What's up, Ali Schu?) and I was way more concerned with cracking jokes than how fast I ran or with winning. Being competitive took all the fun out of hanging out in the bleachers.

One of girls in my house in Berlin, Kelly, told me about the Hash House Harriers, the drinking group with a running problem, and talked me into going to a hash yesterday.

And in all of my years of seeing people milling around parking lots in running tights - which is to say my ENTIRE life - never have they smoked cigarettes and drank beer to prepare for the run.

Stretching? Sure. Smoking? Not much.

Each hasher has a hash name but as a "virgin" hasher I had to introduce myself as Just Jessica. My housemate, know to other hashers as Rotten Cherry, did her best to fill me in on protocol but there is a lot to remember for a first-timer.

We got off the U-Bahn and looked for a parking lot by the Heidefriedhof cemetery where the hashers were meeting. There were four people standing behind a car and I figured we'd walk up and say something like, "Pardon me, are you the hash house harriers of Berlin?"

Yeah, no. As soon as Cherry saw them, she hollered at the top of her lungs, "Are you?!" and all four heads turned our way.

The hashers introduced themselves - Stiff Nipples, Super Kraut, Fister - and offered us beer from the pony keg while we waited for more runners to show up.

Bob Roncker, if you're reading, I want you to know that I was thinking about you at this point. Not only was I drinking beer before a run but I was wearing Converse. I was committing one of the greatest sins a Roncker can, that of improper footwear. I thought about my arches and how unsupported they were about to be. And I'm sorry dad, but it made me drink more.

The hare, a man wearing blue sweatpants from around 1987, had laid the trail through the neighborhood with little piles of flour and chalk marks. We put our beer glasses in someone's trunk and about fifteen of us, plus one dog named Tiger Fucker, started running. 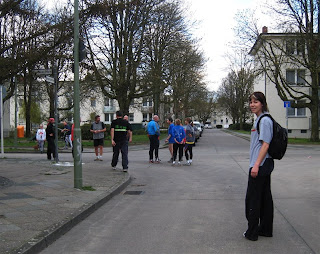 The flour and chalk told us if we were on trail or not. Sometimes we'd lose trail and a scout AKA someone in good shape would run ahead to find more flour. We ran through a park and twisted through neighborhoods, stopping to regroup at corners when we were lost.

"Are you?!" The hashers yelled out to each other, the unspoken half of that sentence being, "On trail?" When the flour was spotted they blew a whistle twice or yelled back "On! On!" and we all picked up again, this time in the right direction.

One outstanding feature of the hash was the no shame policy towards walking OR CATCHING A BUS. The hare announced at one point that people could bus back to the start from there. I'd probably still be giggling over that except I got a stitch in my side from trying to sprint while laughing. Where was this policy when I was running high school track?

Back at the cemetery we had circle. 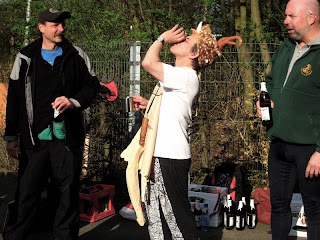 The beermeister passed out bottles of Pilsener and I asked him for a bottle opener. He cracked my beer with the opener hanging from his neck, the one shaped like a wooden dick. Um.

People were called into the middle of the circle for offenses like not wearing hash-themed gear, for wearing new shoes, and for being new to hashing. Inside the circle, you drank a mug of beer and poured the last drop over your head while they sang songs promoting bad words with sexual overtones.

"And who made you come?"

See you crazy fuckers next week.
Posted by ronckytonk at 9:42 AM

Labels: are you f'in serious?, Berlin