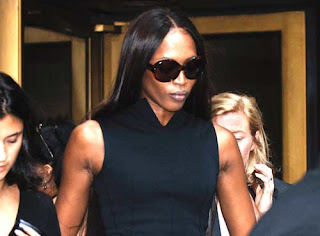 I agree that it would be super annoying to check into a flight and take my seat only to find out that my bags had already been lost. That's why you should have done what I did: DON'T GET ON THE FLIGHT IN THE FIRST PLACE.

Instead of doing what you did: throw a temper tantrum, spit on a police officer, get arrested, and get possibly banned from British Airways. BA is currently deciding whether to ban Naomi Campbell for life or just take away her VIP card, which I find funny. You are rich and will give us lots of money but we think you're bitchy and therefore not Very Important anymore.

Heathrow Airport opened new British Airways Terminal 5 the day I arrived in London and immediately began haplessly f'ing over flyers. The baggage system melted down and at last count 28,000 bags have been misplaced. Hundreds of flights have been canceled.

A few days before I flew to Berlin, I checked my flight info and realized I was on a flight out of you guess which terminal. Oh, hell. I checked the website and it said that less flights were being canceled every day but travelers should know that it may take baggage several extra days to make it to the destination.

I did not find this heartwarming considering I'm not flying to a place where I have other things to use while I wait for my luggage. That North Face bag is all I've got and it's full of things I carefully chose because I want them WITH ME, not wandering all over the rest of Europe while I sit in Berlin turning my panties inside out.

I immediately started looking for a new flight. Joanna thought I was being excessive and couldn't believe I was that afraid of losing my things. She said she'd send the pack to me if I wanted. But I was resolute: I have one backpack and it's staying on my back.

Ryan Air flies out of Stansted Airport so cheaply that it barely hurt to throw money at the potential problem to make it go away. You hear that, Naomi?
Posted by ronckytonk at 12:11 PM