The day I broke up with Tom Clancy, I went for a walk. I was tired but figured it was nothing that an unlimited quantity of caffeine couldn't fix. Also, it was sunny and bright out and I'm a sucker for that.

This walk was through a totally unknown area of the city to me, southwest Kreuzberg. Wow. If I had a crush on Berlin before, I'm now, as Carl would say, IN DEEP SMIT.

If I were on the playground and said, "I love Berlin," and someone replied, "Well, why don't you marry it?" I'd say, "Fine, I will." Or I'd say, "Shut up," because everyone knows that's the best playground comeback.

My infatuation with the city snuck up on me in many ways. When I was here in December, it took a few days to start. The freezing temperatures, the darkness, the kids throwing fireworks at my head, all of it muted the city's effect. Eventually, though, I bonded with the bleakness.

The city in December felt like it was throbbing deeply, darkly. I'd walk past lit storefronts at night and see people bent over drafting tables, art all over the walls. "That wasn't there two weeks ago," Charlie told me. "Places appear and go away."

I left with the impression of a city of artists, musicians, squatters, migrants, seekers. Not a lot of money. A lot of character.

"You have to see it in the Spring," Charlie said. "It's a different city."

During my first two April weeks here, I didn't go out without a wool hat, scarf, and coat. I wore them at some point every day, usually as soon as I left the building. Again, so glad I bought those tube tops in California. What a handy purchase that's turned out to be. Not.

Then, suddenly, it changed. The clouds floated away, the temperatures rose, and the Germans woke up and said, "Oh my god, ICE CREAM."

The lines outside the Eis stores snake down the sidewalk, blocking foot traffic. I couldn't walk through the ice cream traffic jam one day and had to squeeze myself between a woman and a parked car. The woman didn't budge to help me; She was busy positioning three kids with cones in their hands on the crossbar of her bike.

This didn't surprise me. Bicycles rule in Berlin. If you don't drive and you don't feel like taking the U-Bahn, the S-Bahn, the tram, or the bus, you bike. I'm dizzy with options.

Kids, when they aren't strapped into a baby seat or balancing on their parents' crossbar, ride their own bikes. And they start young, too. Toddlers have tiny wooden cycles, a tricycle alternative, low enough for their feet to reach the sidewalk and scoot themselves along.

Almost all streets and sidewalks have a bike lane and outdoor space is full of walkers and cyclists. But however full it gets, it never bears the frenetic pace of New York.

The similarities, however, are there. The beauty of the old buildings, the sidewalk cafes, the accessibility. Everything within reach.

Yesterday I needed to do laundry. Simone's clothes were drying on the balcony off my room so I went to the laundromat across the street. After blindly pushing every button on the automatic vending machine on the wall, I was pleasantly surprised to receive a measuring cup of detergent.

I put my clothes in a dryer and went back to my house for a bath. After I was clean and my clothes were clean and folded, Simone and I walked to the market where I bought Japanese rice crackers and wasabi peanuts and stared at salamis and fresh round loaves of bread. The market wrapped around Kollwitzplatz, a small plaza park with a playground and benches and trees like you'd see in New York, like Tompkins Square Park.

I'm not the only one comparing the two cities. Passing through Mitte last week, I saw a large billboard proclaiming: UPPER EAST SIDE BERLIN. Ha! See? If my original impression of Berlin, Kreuzberg in the winter, was the gritty Lower East Side, I'm now, in Prenzlauer Berg, inhabiting the Upper West.

People are a little older here, more 30s than 20s, have a little more money, and everything is a little more polished. You know they're still artists and musicians but some of them are also web designers. More families, less punks. Lots of fathers out with children. Young dads with babies strapped to their chests, pushing strollers, or trailed by kids on bikes. I saw one dad with a tiny baby in a stroller. Every few feet he bounced the stroller because it made THE INFANT CRACK UP. I heard this baby's belly laugh from ten feet back and started smiling. When I got closer, I noticed that the bottom rack of the stroller was filled with beer bottles.

My recent insomniac walk through southwest Kreuzberg passed through Chamissoplatz, where many buildings survived the WWII bombs. I'd read that movies about "old Berlin" are often shot there and as I wandered through I felt my love affair deepen. By the time I hit the main road, Bergmannstrasse, and had ordered a bowl of Thai soup and sat in the window and watched people, like the man eating Pad Thai on the sidewalk who looked like Michael Douglas if Michael Douglas were homeless with an ACID WASHED TURQUOISE LEATHER JACKET, I was saying to myself,

It's not as cheap as I thought it was in December but it's not as expensive as New York. And it's slower, with more green space. (Over 416,000 trees. Someone has done her research.)

I ended up that night in Charlie's kitchen. We sat at the table and, between screaming with laughter over New York memories, talked about what it's like for him as a foreigner living in Berlin. I compared it to my impressions as a traveler: I don't have to worry about visas and work and the economy, I'm living off savings.

I only trifle with the German character, silly exchanges and misunderstandings with shopkeepers, baristas, and bouncers. I'm not confronted with real cultural difference. I don't have a boss or a schedule and I'm not trying to have close relationships; this trip is more about me. Stress level zero. I can laugh everything off.

I told Charlie that this is my favorite city. His is still New York. Which may come down to our different preferences and sensibilities but may also be related to the difference between permanent and temporary states.

I looked at the clock, "Is it one o'clock already? I can't believe I'm awake, I was falling asleep this afternoon. We've been talking for five hours?" 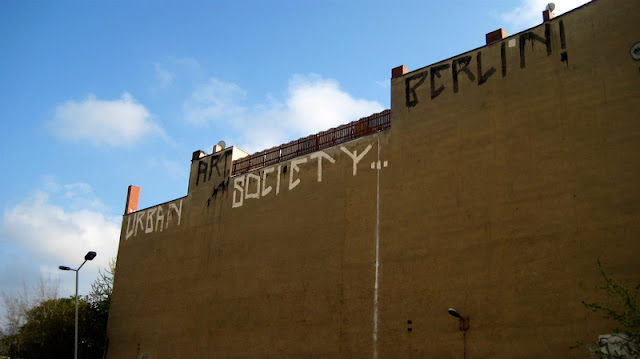 Posted by ronckytonk at 1:54 PM