Mapping it out in Berlin

Since I arrived in Berlin, I've been exploring on foot. The first time I was here, I stayed with Charlie and had an instant informant and partner in evildoing. Unlike that visit, I haven't yet been swallowed by prolonged sessions of jabberjawing and clubbing, surprised by daylight when I finally stop dancing or talking.

This trip is starting more slowly, more of an endurance race than a sprint, since I have more than a week. Also, Charlie's hands are currently full with his mom and aunt visiting from Australia. I'm living in a different part of the city and until I discover the best route walking from Prenzlauer Berg to Kreuzberg, it takes me approximately until the end of time to get there.

The map acts like it's about two miles away but I've been relying on my internal compass and the needle on that thing is spinning wildly in circles.

My first morning I walked out of Simone's building and took a left thinking that I'd just see where left goes. I had a map that she thoughtfully gave me and it is comprehensive. So comprehensive, in fact, that I'm instantly more confused about my whereabouts when looking at it.

BERLIN IS NOT BUILT ON A GRID. It's more like the opposite of a grid. It's dense and curvy and diagonal and the street names are long and, unless I'm imagining things, change often. My map is also a TANGO MAP, pointing out the best places to get my milonga on. Berlin is the tango capital of Europe! But I don't really know how to do that. I didn't bring the tango shoes I bought last year in Buenos Aires because I don't tango so that part of the map isn't helpful.

Eventually I made it to Friedrichshain and familiar surroundings. That first night I decided to take a different way home. This was fine until two hours had passed and I had to admit to myself that my usually good sense of direction was making me cut wide swathes all around where I wanted to be. As if I wanted to see how close I could get to getting it right while actually still being wrong. I hailed a cab.

Yesterday, humility drove me to a book I bought in London called 100% Berlin which outlines walks in the city. I went to a restaurant and ordered the only thing on the menu I could say, omelette, and wrote down in my journal where I was going and what I wanted to see. This is so much more planning than I usually do but I have been humbled by the streets of Berlin.

I carried my journal in my hand and peeked inside every so often and it was satisfying as hell. I figured out where I'd gotten mixed up the night before and found all kinds of places I might not have wandered to on my own. I was feeling all proud of myself, like I'd invented something instead of I'd JUST FOLLOWED DIRECTIONS FOR ONCE.

It also occurred to me that it's a good thing to have these open-ended solitary hours because it's not something I've been tapping into. I've been off work for over a month and it's been almost all social time. I've run around with friends I don't see enough of, which is priceless. And there have been bonus surprises like discovering that Gail was in New York when I was; I usually only get to see Gail in Minnesota or Alaska.

But part of my goal for this Spring has been to get into my head, way in there, into the curvy little back roads of my brain (speaking of not being built on a grid) and make some order of it. I want to examine what I write about and think about and what I want to write about. I want to MAP IT OUT. Ah-ha.

I finished yesterday's walk and went back to a cafe I passed earlier. I wrote down something I was thinking that day and let it simmer for awhile. I flipped back in my journal and remembered thoughts I'd been been sitting with a few months ago. I wondered how random or related they are.

"I'm gonna go all stream of consciousness on my ass," I thought, "And then see if I can pull it together."

I woke today and set out after my three-hour minimum of puttering around. I have the afternoon free before meeting Charlie after work. I turned a corner and was struck by the thought: WHATEVER HAPPENED TO THAT TV SHOW DOUBLE TROUBLE? Followed immediately by, "I let the gates down and this is what comes streaming in?" 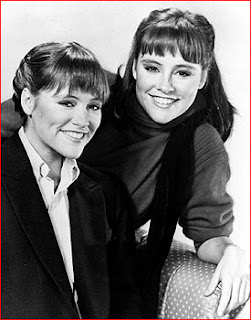 Posted by ronckytonk at 7:08 AM

I love reading about your adventures. Get lost more often. Even if you do end up at Dead Television Show Junction.

Oh, and I totally just IMDBd that show. Did you know the actresses who played the twins are the younger sisters of Peg Bundy? Every journey has its purpose...