There is a 548-foot-long crack in the floor of the Tate Modern Museum and for six months it has been pissing people off.

When I went to the Tate last January, I glanced at the crack from the atrium and thought, "Oh, a crack. It's big. Moving on."

When I went back last week, there wasn't much else for me to see since I'm not on friendly terms with Marcel Duchamp, the main exhibit, and I'd seen most of the rest. The crack it would be! 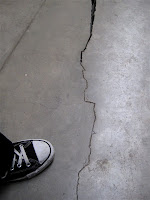 The crack is called Shibboleth and was made by a Colombian woman named Doris Salcedo. It starts small before it grows and splits into jagged sections like bolts of lightning.

I had a moment while staring into one of the bigger chasms where I felt like I was in a plane and looking into canyon and I wondered how Doris did that. Just as quickly I decided I didn't care, that it was more interesting to see its effect on people than understand the mechanics. 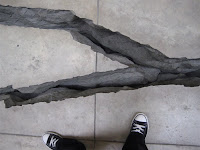 Most people were walking slowly, peering in, or zigzagging so that they had to keep stepping over the crack. Kids were by far the most enthusiastic zigzaggers.

Do you remember being engrossed by walking down a sidewalk, avoiding all the cracks so as not to break your mother's back?

For kids this crack, at places three feet deep and ten inches wide, would be the HOLY JACKPOT of making sure you were careful. Not only would you eff your mother up if you stepped on it but you'd hurt yourself.

Which, apparently, an old lady did shortly after the opening of Shibboleth. Her tumble prompted the flyers posted about which essentially said PLEASE BE AWARE THAT THERE IS A HUGE CRACK ALL OVER THE FLOOR - WATCH YOUR STEP and editorial comments from people like, "I can't believe people who went to look at a crack in the floor, and presumably therefore knew it was there, went on to fall into it." 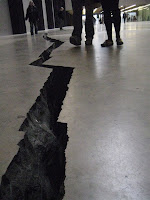 All I can say is that once I went to an art opening with Lukas in Brooklyn and SOMEONE who may have been a little tipsy almost spilled red wine on one of the pieces. Accidents happen.

The controversy over the crack is predictable. That's not art. How many taxpayer dollars did this cost us? My kid knows how to dig a hole, too.

Yeah, but can your kid enter into a discourse on how the hole is an expression of a poor migrant's experience in a rich western capital? Has your kid tried to symbolize racial division and segregation lately? I DIDN'T THINK SO.

Yes, once you start talking about art you enter the danger zone of pretension. The language surrounding art can sometimes be too much to handle. Sometimes I hang onto every word and sometimes I plug my ears and say la-la-la and just use my eyes because I can't take the attitude. 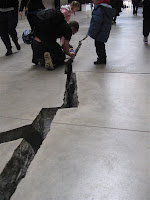 But I liked the crack; It was causing a reaction. It was performance art, the performances being given by those who went to see it and who wrote letters to the Guardian and the Times and the Telegraph about how they felt about it.

As for taxpaying dollars, it cost 23,000 pounds to ship the crack to London from Colombia. That is a lot of money. But I bet that if people looked closely at any national budget there would be a LOT more to get upset about than 23,000 pounds spent on something that might be making you think.

It's not like, killing you or an innocent person in, I don't know, the Middle East.

Maybe budgets for art should be respected anywhere that values spirit and invention and tolerance and the kind of disagreement that happens when people do something unexpected. Or should art just be about making pretty stuff?

One negative comment made about the crack that I did relate to was from a man named Bob in Manchester who saw people were on the other side of the room looking at normal little cracks in the floor, going, "ooh", "wow", "amazing". Ha!

Yeah, people, you don't have to prove how much you get something. Don't shit yourself in the process of being amazed. Just let it sink in.
Posted by ronckytonk at 11:59 PM

I have mixed feelings on the crack. I saw it on October and wasn't sure how I was supposed to respond to it. So I walked away and stared at the big spider outside instead. Then I got scared and crossed the Millennium bridge, which was also a scary experience. Dammit.

I think not knowing how to respond to a crack in the floor is an honest response. more honest than having a hissy fit or oohing/aahing without thinking about it.