Drinking beer off my foot 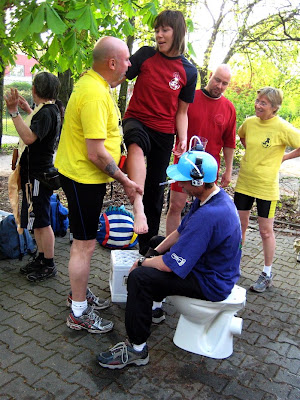 Hm, there's something fishy about this photo. I wonder if it's related to the fact that I'm standing on a beer crate without one of my shoes and socks.

And maybe it's the guy sitting on a toilet and looking at my foot. With a beer bong on his head. Not that I know anything about beer bongs - this might not even be one.

The closest I got to a beer bong was the one fraternity party I went to my freshman year of college, the same party that, in conjunction with a homecoming parade outside my dorm, made me take a 19-hour Greyhound bus trip from Minneapolis to Cincinnati to sob on the couch to my parents about how I don't want to go to school anymore. 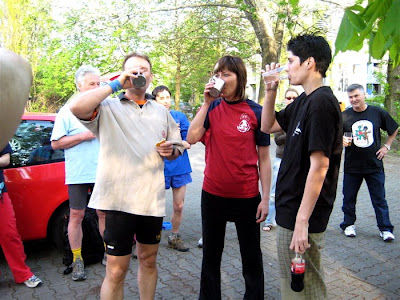 I'd already been called into the hash circle twice. Once for being new and once for POINTING WITH MY FINGER.


I'd forgotten the hash rule that you can only point with your elbow. I'm sure there's a fine reason for the elbow rule but, oddly enough, pointing with my elbow is not an intuitive move of mine.

During the run, my roommate asked me something and when I pointed like a normal human being, I got yelled at by the hasher with the bugle, Lame One.

"No pointing with your finger!" he bellowed. 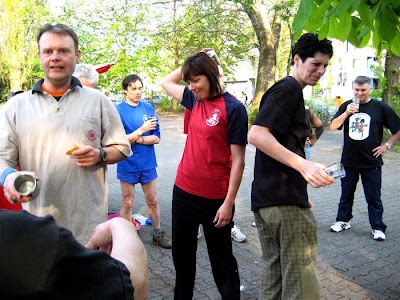 I shrieked and yanked my elbow up. Not that it mattered since I forgot so immediately that I pointed with my right finger while my left elbow was still up.

Lame One repeated himself at the top of his lungs and then blew the bugle so loud that I almost dropped to the ground and went fetal.

"I'm in trouble," I said to my roommate under my breath, "I'm gonna get called into the circle."

Sure enough, I was. After I'd been in the circle twice I thought I was safe. I'd resumed my position on the outside and was nursing a Berliner Kindl and laughing at this guy. Yesterday was his last hash before he leaves for India so he got special treatment. They don't make people drink beer from a toilet any old day. 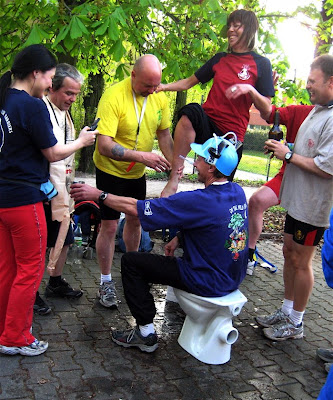 So when Lame One said to me, "You! Take off your shoe and sock! In the circle!" I was surprised.

I took off my shoe and sock and stood on the crate. The hasher in the yellow shirt, Stiff Nipples, looked at my foot.

"Your toes are black," he said, "Do you have mushrooms growing on them?" WHICH IS ONE OF MY ALL-TIME FAVORITE TRANSLATIONS. I giggled for a week in Ecuador when someone got a yeast infection and the doctor diagnosed mushrooms. It just makes fungus sound so adorable. 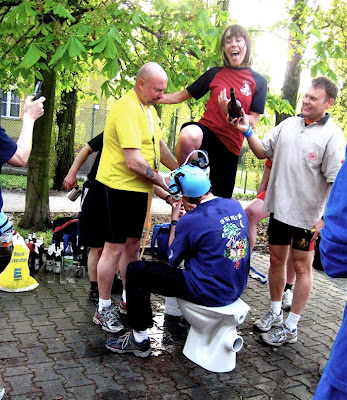 Stiffi touched my foot and I started screaming. People, I am ticklish. I get antsy when my feet get LOOKED AT. I've kicked people in the head when they thought they were being funny.

When I was little, my dad teased me by hovering his hands close to my feet. How amusing to watch me go into convulsions when all my nerves pricked up. So this little situation right here? Let's just say it didn't improve when Lame One started pouring beer down my calf and beer bong started drinking it off my foot. The reason it looks like I'm trying to escape is because I am.

But let's look at it from beer bong's perspective for a moment. He is sucking on the foot of someone who just went running in tube socks and basketball sneakers. Who may or may not have mushrooms. 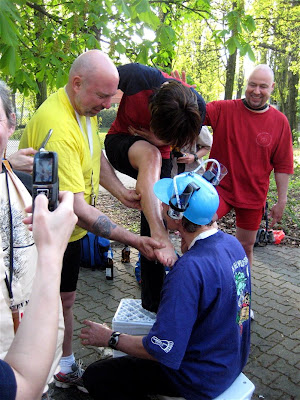 Posted by ronckytonk at 2:39 PM

whoa. berlin does look fun. (if you're deaf and don't have to speak. no offense to all my german friends, but it's not a language that rolls off the tongue... or looks real pretty in print.)
anyway.
may i suggest you read some vintage, noir-ish crime? not tom clancy. i fear you might be secretly judging me, thinking that i would read such crime-trash.

no judgment, b. i finally got some good noir - Shadowland by Gordon Stevens. as for german, I used to think it was ugly and now think it sounds cute.

You've been to at least two frat parties. One was with me in Clifton, at the most unerotic frat house in gay history.

oh shit, jocardo. i forgot all about that clifton one. the one where you tried afterwards to tell someone that we were a frat party and i punched you mid-sentence to cut you off (must.preserve.image) that was a horrible party, tho. sorry about punching you.