I've been thinking how great it's been to have this family time in London before I hit Berlin where almost no one knows me. Except for time spent with Spice friends and time wandering the city, I've been a homebody. I catch the train from Liverpool Street and 15 minutes later I'm back in Walthamstow. I drink white wine and talk to Joanna and watch American Idol for research purposes and fall asleep on the couch. I wake early.

Last Sunday Joanna, Jon, Alfie and I walked to Tottenham to have Sunday roast at a pub. We walked along a trail and a canal and there were people on bikes and dogs and families and the sun was shining. Alfie fell asleep in the buggy - sorry, stroller - and we sat in a beer garden and drank Guinness and lager before going inside for Yorkshire pudding and roast beef.

Another night I babysat so that Joanna and Jon could have a night out. They hovered by the baby monitor while I typed away on the computer and told them to get out, I could handle it. I've been taking care of children for a million years.

"It's just that he might wake up in a minute and if you're the only one here, he'll have a row," Joanna said.

Ten minutes later Alfie woke up and had a row.

I heard him come out of his room and I called up the stairs, "Go to sleep, Alfie." When he heard my voice, he screamed what my mom would call bloody murder. I went up, scooped him up, and held him through a few futile hush little babies and you are my sunshines. He was terrified and shaking and I knew exactly how he felt. For years, I was the kid who couldn't get to sleep without my parents in the house, who had to come downstairs and curl up in the beanbag chair and sob and shudder while some babysitter rubbed my back. So I gave in quickly, "Do you want to come downstairs with me?"

"You can," I said. "You can lie down on the couch, but it's quiet time, not play time. And we're not gonna put on Nemo, we're watching Rockstar Daughters on E."

Alfie was compliant and silently listened to Calico Cooper and Liv Tyler's stories before shutting his eyes. When Joanna and Jon got home, we were both curled up on the couch, asleep. 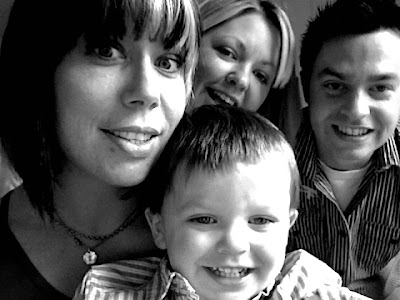 Posted by ronckytonk at 4:42 AM

SO amazing to see all of you together. If Alfie can put up with Rockstar Daughters, I think he'll turn out just fine.

Watching American Idol and calling it "research" is very clever of you. You shouldn't feel guilty (remember, you shouldn't feel guilty about anything) or need an alibi to watch the Greatest Show on Earth (OK, so it's tied with The Office). I happen to be a huge fan of AI (just like you). Is there any way you can get me a ticket to a show when they go on tour this summer???

dear person who won't tell me who you are, thanks for reminding not to feel guilty even though I don't actually feel guilty about AI, I was just trying to be 'funny', anyway, sure, I'll get you tickets to a show this summer, i'll leave them at the box office under Anonymous